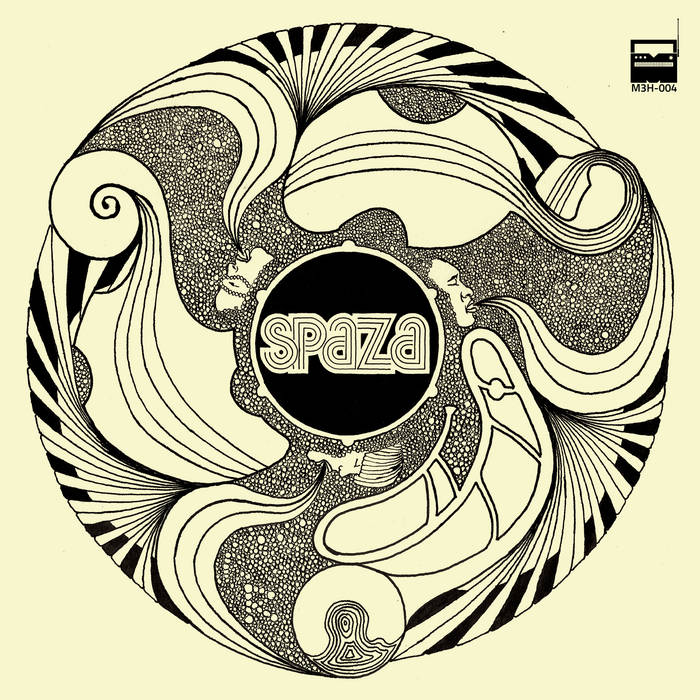 Conceived in the Mushroom Hour Half Hour lab, SPAZA is a band with no permanent personnel, with each lineup assembled for the express purpose of recording once-off improvised or workshopped material. For this, the initial salvo, SPAZA was put together from a group of musicians with individual and collective links to Johannesburg’s jazz, afro funk and experimental electro scenes.

In the context of this completely improvised album, the term “spaza” not only refers to the gallery in Troyeville, Johannesburg where this project was recorded live (and in one take) in the autumn of 2015, but to South Africa’s thousands of informal neighbourhood stores.

In South Africa, “spaza” has come to signify an entrepreneurial spirit, especially in the country’s black townships where economic barriers to business ownership mean that only a few can attain the status of formal business ownership. In the country’s socio-political context, spazas, usually operating out of converted garages, shacks or repurposed shipping containers, are also contested territories. They are sites of often fatal bloodshed where financially disenfranchised South Africans routinely mete out their frustrations on those they consider “foreigners” and “outsiders”. It is these outsiders who have come to dominate the spaza economy. However, spazas are also colourful, with their facades branded, styled and designed by each owner. They can become the nerve centres of social activity in the communities they occupy and are often stocked with an array of iconic South African brands and products, many of which are referenced in the track names of this album.

Perhaps obliquely, there are musical sensibilities to be grasped at the mention of the term. “Spaza,” the recording, the location, the revolving ensemble - all evoke a spirit of independence, a D.I.Y aesthetic, a propensity for spontaneity, and, literally, a coming together of minds at the corner to shoot the breeze or let off a seriously considered prognosis.

True to this, there is a heightened and sustained sense of intuition running through this recording whose sonic palette is so wide it captures - through soundscaping, invocation, lament, impressionistic vocal weaving - not only the transient and hybridised nature of life in Johannesburg, but also the heaviness of the air at the time of its recording. More ambient, controlled swirl of rhythm and experimental mixing than incessant groove, the album is an outpouring of a range of expressions that exist between the supposed binaries of indigenous forms of music and the electronic experimentation Johannesburg is known globally for. Between percussionist Gontse Makhene on the bottom end of the scale, and sound sculptor Joao Orrechia on the nebulous end of it, vocalists Nosisi Ngakane and Siya Makuzeni (who also plays trombone) marshal a vocal experiment that is as tense as it is playful. From their respective posts, bass player Ariel Zarmonsky and string wizard Waldo Alexander stitch, stretch and add body to the various strands of sound being created.

There is an intelligence to the vocal sculpting that gives structure and coherence to the music, creating a sonic monolith that honours various aspects of South African life, including divination, burial rites, as well as the precariousness of a simple trip to the cornerstone. The interlude Tigerbalm noBuhlebakho, for instance, relays the sometimes charged atmosphere of a trip to the spaza, one laced with catcalling indicative of the war over womens' bodies. While this can end in violence and, in some cases, death, ultimately this album seems to point to the liberating feeling of levitating above it all.

At times opaque, and at others direct, SPAZA is always unyielding and propulsive. This could be the sound of the city turned inside out, ruminating on its troubled history and ever morphing present. There are pensive and celebratory streaks crisscrossing the album, not to
mention a vulnerability that is in keeping with the spontaneous ethos of Mushroom Hour Half Hour. The results, shaped in the Pan African milieu that is Johannesburg, is a freewheeling representation of continental astral travel.

To the memory of Bra Peter Makurube.